Discover the superpowers of critical raw materials with our public awareness online campaign! 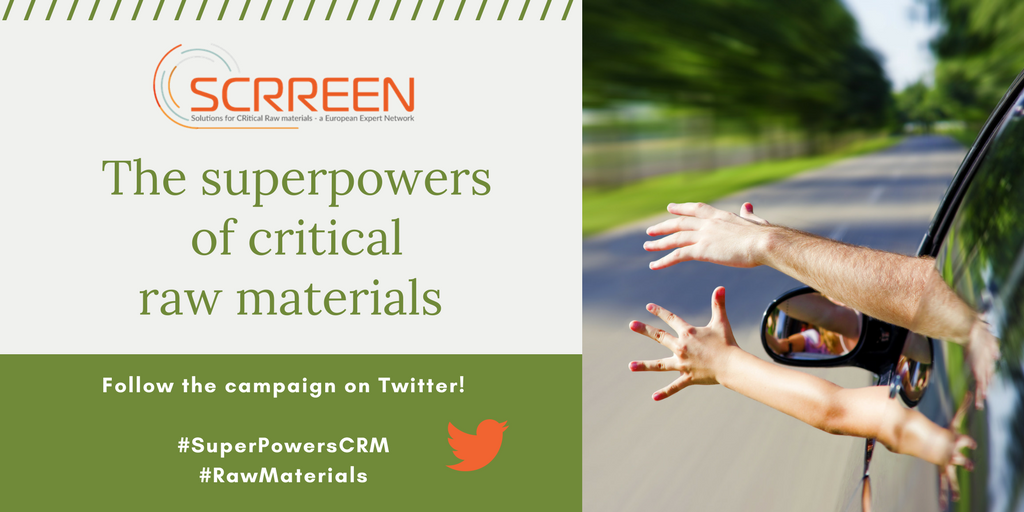 In the bid to raise the awareness of new critical raw materials, the European SCRREEN project is launching a multilingual communication campaign today, 26 March 2018. This campaign is geared towards informing and educating the European public on the challenges linked to the 27 raw materials classified as ‘critical’ by the European Commission. Cars, wind turbines, solar panels and smartphones… ‘critical’ raw materials (CRMs) are used in all the technologies which are essential for the energy and digital transition.

Why critical raw materials are important?

In the Earth’s crust, critical raw materials are often mixed with other plentiful metals such as copper or iron. Most of these CRMs have unique chemical, physical and electromagnetic features which make them costly and of increasing value. Since 2011, the European Commission has published a regularly updated list of these materials. The third list of CRMs released in 2017 comprises 27 raw materials. The criticality of these materials is mainly determined by their economic importance and supply risks. The lack of mining infrastructures coupled with a low number of producing countries amplifies these risks.

Through 12 visuals, The Superpowers of New Critical Raw Materials campaign aims to make the public aware of the different forms which CRMs take in our day-to-day life. CRMs are raw materials which have economic importance and are subject to possible scarcity. Their exploitation often leads to challenges which the campaign will inform by shedding light on the different initiatives led by Europe to address them. As part of this campaign, a new visual will be published and promoted monthly via this dedicated SCRREEN website and Twitter account @SCRREEN_EU.